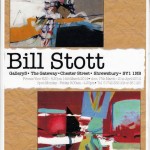 Oh dear. Late again. But fear not ! I have a shedload of excuses. One is that I’m getting ready for an exhibition of my paintings – numbering everything, titling each piece, measuring it and pricing it. This last is probably the least accurate. Its all happening at Gallery 3, The Gateway, Shrewsbury, 17th March to 21st April. And its all non-figurative – you know, that stuff your dog could do, except that he/she couldn’t because of an absence of thumbs, and also because they probably wouldn’t want to.

I’ve also been busy churning out quick STOPHS2 gags [see Gag of the Month] for my local action group.[They’re all over Farcebook] The government’s conduct throughout this sorry, expensive affair has been lamentable and their response to a super critical INDEPENDENT report on their silly train scheme has been suppressed via a “little – used law”

I bet Cameron and his out-of-touch rich chums would love to ditch HS2, but the hole they’ve dug is now pretty deep. In the meantime, house prices in areas like mine are blighted. Thanks Dave.