After the sad death of our long time companion, Maggie the Dog in December last year, the house just didn’t feel right. No sound of paws padding around, no soulful staring at mealtimes, no avid wildlife programme viewing on TV, no growling at the window cleaner – and all the other aspects of the canine/human bond dog owners will recognise.

So, after looking at lots of dog re-homing sites we came across Wilma. Why “Wilma”? No idea. All we know about her is that she’s around eight and had spent at least six years as a stray on the streets of Dublin. Doubtless, because of that, Wilma’s scared of everything. Its taking time and patience to gain her trust. But we’re getting there. She’s only been with us eight days but now she’ll hop up on to the settee and look for a stroke. She follows me everywhere and as I type, is curled up on my right foot. She is a delightful animal. Why she was an abused stray for so long is anybody’s guess. What IS certain is that there are people out there who are cruel to animals. Sometimes the cruelty is organised, like fox-hunting – which still goes on, despite the ban – and secret dog – fighting. Badger- baiting, organised and carried out by really damaged people still happens. Why ? Why do humans do these despicable things ? Psychiatry might give us all manner of reasons. Socialisation, upbringing ,inherited psychoses etc., etc. Whilst I do try to understand why humans do bad things to animals and each other, my gut reaction, if I caught someone playing football with a hedgehog [Oh yes – that does happen] would be to take the humans aside and give them a good seeing – to. Some would say that would make me no better than the hedgehog abusers. I’m not so sure. If human animal abusers got a good thump every time they abused an animal, they’d soon stop.

There’s a phrase – a cliché almost which says, “Its only a dog”. I pity people who think like that. Gaining an abused dog’s trust is very rewarding and demonstrates that mysterious bond between two different species. Dogs know a lot more about us than we do about them.

Meanwhile, back in Cartoonworld, its not getting any easier finding new work. All the old faithfuls still need work and soon it’ll be 2020 calendar time. Twelve full – colour spreads and an A3 cover ! That’ll keep me busy for ages. 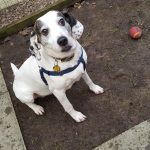 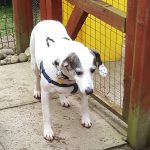