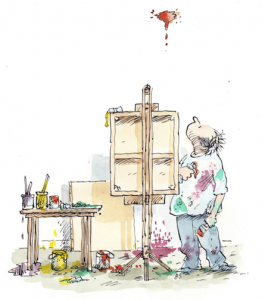 Whilst I’ve earned my living drawing cartoons for a long time now, about five years ago I started painting again. Don’t know why, but I was trained as a painter in far-off Art College days, and maybe it never leaves you.

Something which HAS changed is my understanding of non-figurative images – you know, those pictures which don’t appear to be of anything REAL. Sometimes they’re called “abstracts”, but I don’t really understand what that means. What I am sure of is that an image doesn’t have to be a reproduction of reality to be valid – just as a piece of instrumental music doesn’t need words to elicit a response from the listener.

Personally, I don’t think pictures need titles. I’ve given mine titles which don’t necessarily describe what you see. They might be about music which was playing whilst they were being made – noises off, so to speak, or they might be about a vague feeling the picture gives me. Boringly, titles do make pictures easier to catalogue. I’ll be putting more pictures up just as soon as I’ve photographed them.

You can view the paintings here. Thanks for looking.